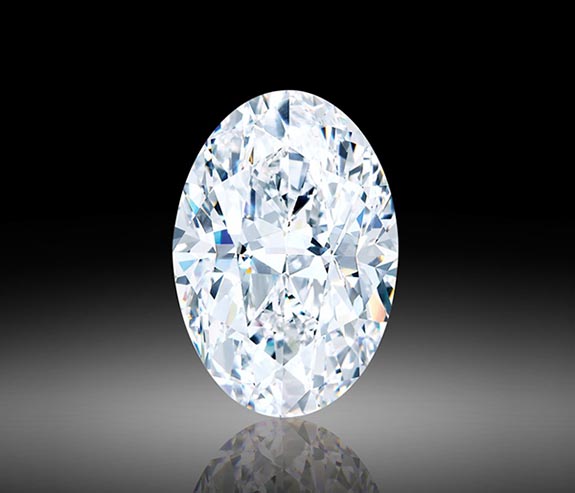 Yesterday’s single-lot auction was considered a landmark event for a number of reasons.

It was the first time a diamond of that importance and value was offered at auction without reserve. Usually, a high-value item would enter an auction with a reserve price, which is the confidential minimum selling price agreed upon between the auction house and the consigner. If the bidding failed to meet the reserve, the piece would be withdrawn from the sale. With no reserve, the top bidder is the winner, no matter what.

“Offering without reserve is really a way to let the market decide what the price is going to be for this diamond,” Quig Bruning, Sotheby’s head of jewelry in New York, told barrons.com in the lead-up to the sale.

Yesterday’s auction also represented the first time a 100-plus-carat flawless diamond was sold via a combined online and live auction. Online bidding had started on September 15 and had reached $10.9 million. Yesterday’s live sale ran for about 10 minutes with the bids slowly increasing in increments of HK$100,000 ($12,903).

It looks like the Japanese collector got a great deal. Sotheby’s did not publish a presale estimate for the diamond, but based on previous sales of similar stones, some experts were anticipating a winning bid of $30 million.

The 102.39-carat gem was cut by Diacore from a rough diamond weighing 271 carats. That stone was sourced in 2018 at De Beers’ Victor Mine in Ontario, Canada. The exacting process of cutting and polishing the diamond took more than a year, according to Sotheby’s.