Our multi-part virtual tour of the Smithsonian’s National Gem Collection continues today with a closeup look at the 422.99-carat “Logan Sapphire.” It’s not only the heaviest mounted gem in the storied collection, but also boasts a provenance that links one of America’s most prominent families with Indian royalty. 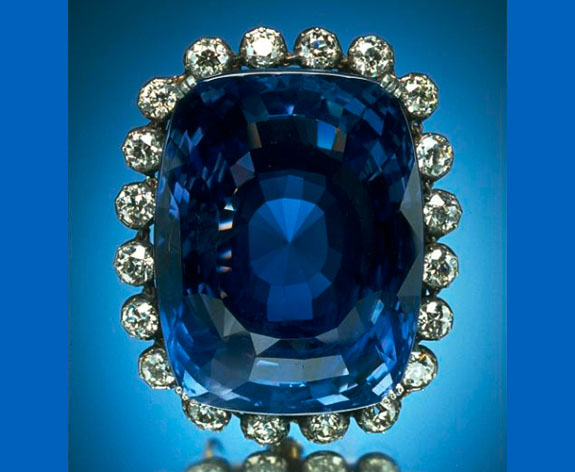 Set in a silver-and-gold brooch and framed by 20 round brilliant diamonds weighing approximately 16 carats, the cushion-shaped Logan Sapphire was cut from a crystal mined in Sri Lanka in the mid-1800s.

Normally, the more than six million annual visitors to the Janet Annenberg Hooker Hall of Geology, Gems, and Minerals in Washington, DC, would find the magnificent sapphire in the gallery called “Precious Gems 2.”

But, with all the Smithsonian museums in Washington, DC, temporarily closed to support the effort to contain the spread of COVID-19, we offer our third virtual tour of the hall. Next stop: the Logan Sapphire.

— First, click on this link… The resulting page will be a gallery called “Geology, Gems & Minerals: Precious Gems 1.”

— Next, simply touch the double-right-arrow once to navigate to the gallery called “Geology, Gems & Minerals: Precious Gems 2.”

When you arrive, the left of the screen will be filled with a topaz exhibit. Lining the walls to the right of the gallery are jewelry showcases that include the “Hall Sapphire and Diamond Necklace,” the “Bismarck Sapphire Necklace” and the “Logan Sapphire.” 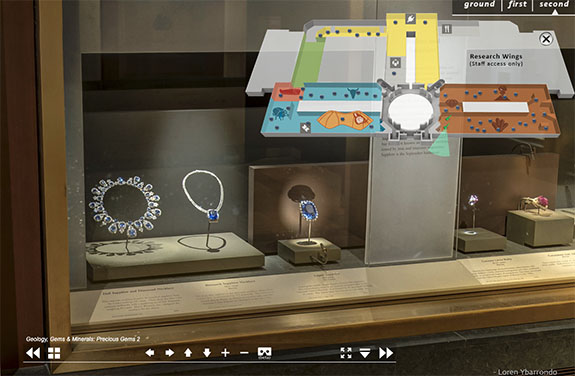 — Click and drag the screen one-quarter turn to see the sapphire exhibits.

(Touch the plus sign to zoom in. Touch the “X” to close the map to get a better view of the jewelry and gemstones. You may restore the map by clicking the “Second” floor navigation on the top-right of the screen.)

The sapphire brooch had been given to Rebecca Pollard Guggenheim as a Christmas/anniversary gift in 1952 by her then-husband Col. M. Robert Guggenheim. The Guggenheims had amassed one of the world’s largest fortunes through their mining and smelting businesses, and later became equally famous for their philanthropy.

Rebecca donated the magnificent gem to the Smithsonian in 1960 but kept it in her possession until 1971. Col. M. Robert Guggenheim passed away in 1959 and Rebecca remarried three years later, becoming Mrs. John A. Logan. This is where the Logan Sapphire gets its name. The gem went on display in Washington, D.C., in June of 1971.

Robert Guggenheim reportedly purchased the gem from Sir Ellice Victor Sassoon (1881-1961), the third Baronet of Bombay. The Sassoon family had acquired the gem from a maharajah in India.

After studying the gem in 1997, the Gemological Institute of America concluded that the Logan Sapphire’s impressive color — a vibrant medium-blue color with slight violet overtones — was completely natural. It has never been heated or treated in any way. 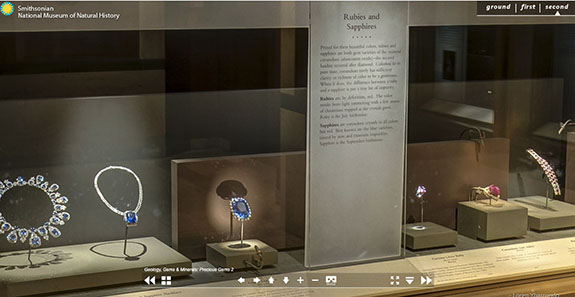 A wall panel between the sapphire and ruby exhibits describes how both gems are members of the corundum family.

“Colorless in its pure state, corundum rarely has sufficient clarity or richness of color to be a gemstone,” the panel explains. “When it does, the difference between a ruby and a sapphire is just a tiny bit of impurity. Rubies are, by definition, red. The color results from light interacting with a few atoms of chromium trapped as the crystals grew. Ruby is the July birthstone. Sapphires are corundum crystals in all colors but red. Best known are the blue varieties, tinted by iron and titanium impurities. Sapphire is the September birthstone.”