Welcome to Music Friday when we would normally bring you fun songs with jewelry, gemstones or precious metals in the title or lyrics. Today we bend the rules a bit to include an artist with a gemstone in his name. Performing from his home this past weekend while in self-quarantine, Neil Diamond spun up a few new lines to his universally loved 1969 hit, “Sweet Caroline,” to support the international effort to stem the spread of the coronavirus. 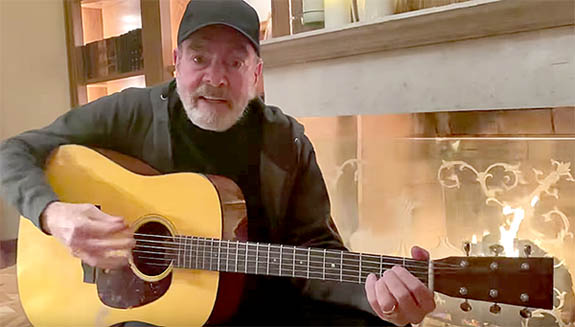 The 79-year-old Diamond, who was forced to cancel his worldwide golden anniversary tour in 2018 due to a Parkinson’s diagnosis, explained in the intro of his song why he decided to create this parody.

Sitting in his den with a raging fire in the background and his photogenic pup nearby, Diamond said, “Hi everybody. This is Neil Diamond. And I know we’re going through a rough time right now. But I love ya, and I think maybe if we sing together, well, we’ll just feel a little bit better. Give it a try! OK?”

Diamond’s effort was wonderfully received on social media, with more than 2.5 million views on YouTube and 140,000 Likes on Twitter. His humanitarian musical outreach was praised by the Los Angeles Times and USA Today, among other high profile outlets.

“Sweet Caroline” is a song that has been woven into the fabric of American culture. Played at sporting events from coast to coast, when Diamond sings the line, “Good times never seemed so good,” the crowd chants back, “So good, so good, so good.”

Diamond revealed the truth during a 2014 appearance on the Today show.

“I was writing a song in Memphis, Tenn., for a session. I needed a three-syllable name,” Diamond said. “The song was about my wife at the time — her name was Marcia — and I couldn’t get a ‘Marcia’ rhyme.”

The song was released in the summer of 1969 and zoomed to #4 on the U.S. Billboard Hot 100 chart. Over the course of his 58-year career as a singer-songwriter-musician, Diamond has sold more than 130 million albums worldwide and placed 38 singles in the Top 10 on the U.S. Billboard Adult Contemporary chart. None has been more enduring than “Sweet Caroline.” The song has been covered by Elvis Presley, Frank Sinatra, Roy Orbison, Julio Iglesias and many more.

Even though Diamond has officially retired from touring because of his illness, the musical legend performed at the 24th annual Keep Memory Alive Power of Love Gala benefit, which took place at the MGM Grand Garden Arena in Las Vegas in early March.

“I’m feeling great,” Diamond told People at the time. “This is an important thing they’re doing and I feel honored to be part of it and take part in it.”

Please check out the video of Diamond’s “Sweet Caroline” parody. His intro, along with the altered lyrics are below if you’d like to sing along…

(Intro: Hi Everybody, This is Neil Diamond.
And I know we’re going through a rough time right now.
But I love ya, and I think maybe if we sing together
Well, we’ll just feel a little bit better. Give it a try! OK?)

Where it began, I can’t begin to knowing
But then I know it’s growing strong
Was in the spring
Then spring became the summer
Who’d have believed you’d come along

Hands, washing hands
Reaching out, don’t touch me, I won’t touch you

Hands, washing hands
Reaching out, don’t touch me, I won’t touch you

(Outro: Good night everybody. Good night. We love you.)