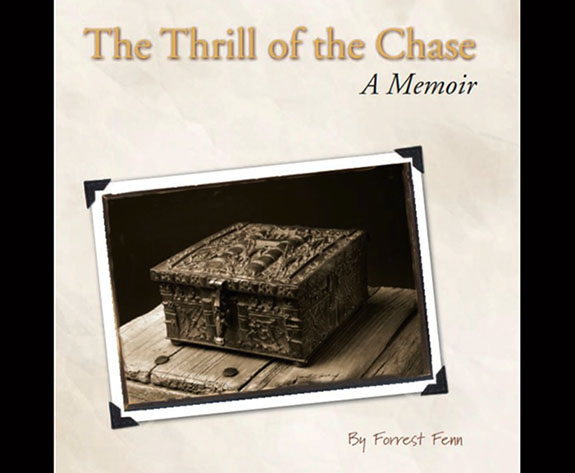 The eccentric multi-millionaire had sparked a mini gold rush in the Rocky Mountains north of Santa Fe when he published clues to the location of a 12th century bronze box containing the treasure. Fenn had told The New Mexican in 2017 that the box weighed 20 pounds and and its contents weighed 22 pounds.

Fenn believes that as many as 350,000 amateur and professional treasure hunters had attempted to solve the riddle using clues outlined in his six-stanza poem (seen below).

But, on Sunday night, the 89-year-old art and antiquities collector confirmed on his website that “the search is over.” He noted that the treasure was found by a man from “back East” who did not want to be identified. The treasure hunter confirmed his discovery with a photograph.

“It was under a canopy of stars in the lush, forested vegetation of the Rocky Mountains and had not moved from the spot where I hid it more than 10 years ago,” Fenn wrote. “I do not know the person who found it, but the poem in my book led him to the precise spot. I congratulate the thousands of people who participated in the search and hope they will continue to be drawn by the promise of other discoveries. So the search is over. Look for more information and photos in the coming days.”

Motivated by a cancer diagnosis that gave Fenn only a few years to live, Fenn decided to make this treasure hunt his legacy. He believed the treasure would inspire people, particularly children, to get away from their texting devices and look for adventure outdoors.

Fenn’s self-published 2011 memoir, The Thrill of the Chase, recounts his rags-to-riches story and includes the nine-clue poem. In 2013, Fenn added the 10th and 11th clues: The treasure is hidden higher than 5,000 feet above sea level; No need to dig up the old outhouses, the treasure is not associated with any structure. Here’s the poem…

As I have gone alone in there
And with my treasures bold,
I can keep my secret where,
And hint of riches new and old.

Begin it where warm waters halt
And take it in the canyon down,
Not far, but too far to walk.
Put in below the home of Brown.

From there it’s no place for the meek,
The end is ever drawing nigh;
There’ll be no paddle up your creek,
Just heavy loads and water high.

If you’ve been wise and found the blaze,
Look quickly down, your quest to cease,
But tarry scant with marvel gaze,
Just take the chest and go in peace.

So why is it that I must go
And leave my trove for all to seek?
The answers I already know,
I’ve done it tired and now I’m weak.

So hear me all and listen good,
Your effort will be worth the cold.
If you are brave and in the wood
I give you title to the gold.