A pair of scientists from The University of Hong Kong have developed an autonomous “hunter drone” that can survey wide landscapes and identify valuable gemstone targets using a scanning laser. The drone flies at night and emits a powerful beam that causes fluorescent items on the surface of the ground to glow. 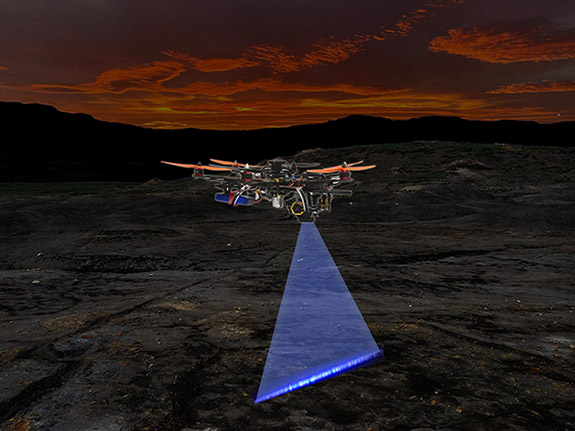 The drone was originally intended to look for fossil bones, hence its name “Laser Raptor,” but the scientists quickly realized that the drone’s capability was far more reaching. Other florescent targets could include rare minerals, such as ruby, kunzite, opal and diamond, to name a few.

Of the diamonds submitted to the Gemological Institute of America for grading over the past decade, approximately 25% to 35% exhibit some degree of fluorescence, a factor that — for the overwhelming majority of diamonds— has no widely noticeable effect on appearance.

In a paper published in the journal Methods in Ecology and Evolution, HKU Research Assistant Professor Dr. Michael Pittman and his colleague Thomas G. Kaye of the Foundation for Scientific Advancement described a prototype drone that was programmed to look for fossils at night in the badlands of Arizona and Wyoming.

At first, the Laser Raptor flew rapidly to search locations using its on-board navigation, and then descended and maintained an altitude of 4 meters above ground so it could “mow the lawn” in search of glowing targets as small as a thumbnail.

After each “mission” was complete, a video of the laser scan was processed to find hot spots that were investigated in more detail the next day, leading to the recovery of new fossil specimens.

They explained that the application of laser-stimulated fluorescence (LSF) to an aerial system is possible because of the laser’s ability to project over great distances with little loss in power.

Pittman and Kaye reported that they are now working to develop LSF applications for the study of geologic landscapes beyond Earth.