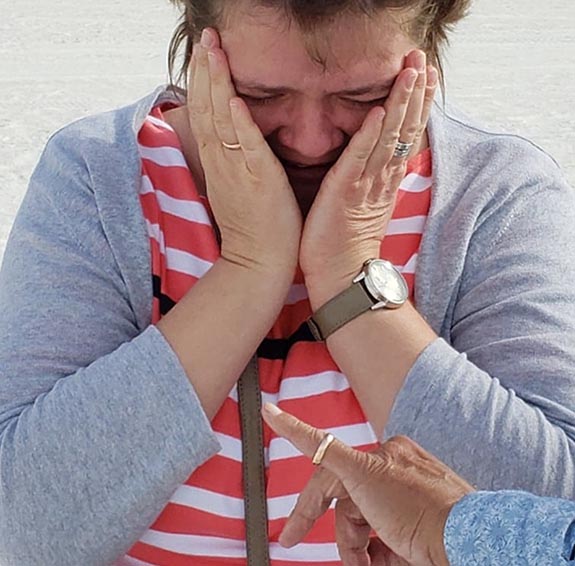 According to an account posted to the Clearwater Police Department’s Facebook page, the couple was crushed when Tobias lost his ring on a visit to the sunny Florida beach the day after Thanksgiving.

“We thought the ring would never be found,” said Imke, who lives with her family in Palm Beach. “We were so sad, we did not know what to do.”

The couple decided to contact the Clearwater Police Department, hoping for news that somebody had turned in the simple gold band that symbolized the couple’s 17 years of marriage.

The ring wasn’t found that weekend, but on the following Monday, Police Service Technician Val Hornbeck referred the Borawskis to a local group of metal detector enthusiasts who work to reunite people with their lost jewelry and other possessions.

The Suncoast Research and Recovery Club boasts a roster of 100 volunteers throughout the Tampa Bay region, and the group has successfully recovered 607 valuable items — mostly rings — over the past nine years. The club is a member of the international group called The Ring Finders.

“If it’s there, we are going to find it,” said Howard Metts, president of the local club.

The club members work for free and are energized when they can connect a prized possession to its rightful owner.

“Just the expression on people’s faces when we reunite them with their lost ring, especially wedding rings and engagement rings,” Metts said. “It’s just a priceless look on their face.”

Metts and two other club members – Ed Osmar and Bill Gallant – met Imke on the stretch of Clearwater Beach where the ring had been lost. One complicating factor was that her husband wasn’t sure if he lost it in the water, on the sand or in the parking lot. 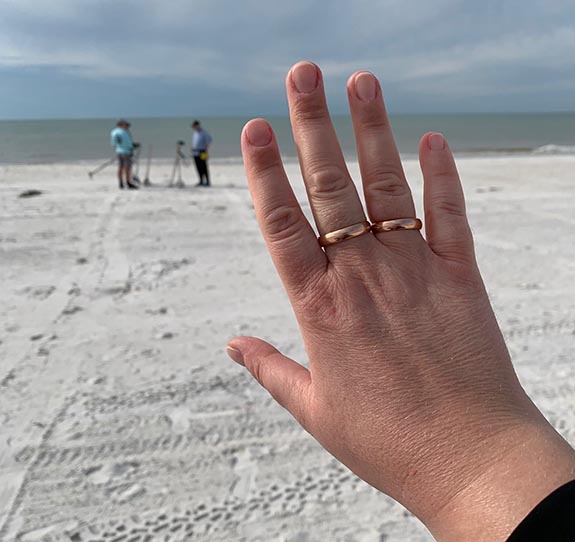 The three treasure hunters methodically scoured the sand and surf. One of them even traced a path all the way back to the couple’s original parking spot.

After about 45 minutes, Gallant found the ring in the sand about 80 feet from the Gulf. As expected, Imke’s reaction to seeing her husband’s ring was priceless.

“I was overwhelmed. I started to cry and I could not find the words for it,” Imke said. “These three people shared their time with us and they didn’t even know us. It was so amazing. It was our perfect Christmas story. I think we will smile about this for the rest of our lives.”