The diamond ring that San Diego musician Scott Szikla used to propose to his neuroscientist girlfriend, Elena Blanco-Suarez, has seen two global pandemics — both COVID-19 and the Spanish flu that swept across the globe in 1918 and 1919. 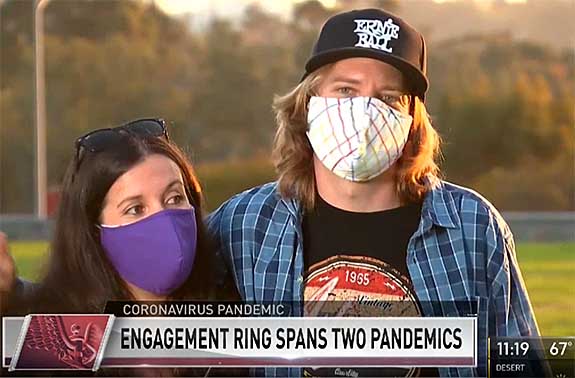 Szikla had planned to purchase an engagement ring at a local jeweler, but was stymied because of the recent disruption of retail business activity in the San Diego area. Instead, the A/V technician and guitarist opted for a family heirloom. 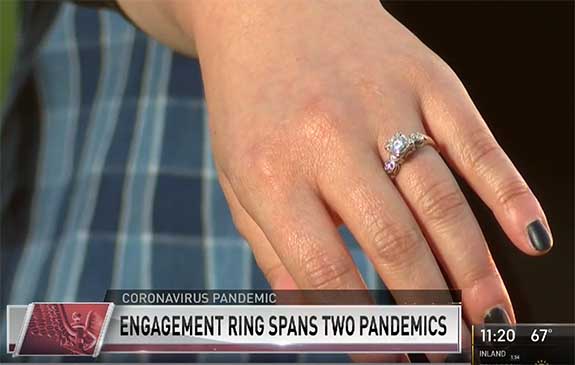 “Since all jewelers are closed right now, I got ahold of my great-grandmother’s ring… It was actually given to her during the 1918 flu pandemic,” Szikla told San Diego NBC affiliate KNSD. “Fast-forward 100 years later and this is happening. Weird timing.”

After sheltering in place together for nearly six weeks, Szikla was ready to pop the question to his girlfriend of three years.

“I guess the quarantine even brought us closer together,” he said.

With his great-grandmother’s ring burning a hole in his pocket, Szikla was ready to deliver a no-frills proposal in their apartment.

But, when the city of San Diego lifted restrictions on some recreation areas, Szikla quickly drew up a new plan. He would pop the question at nearby Bird Park.

This past Friday, a bunch of the couple’s friends visited the park ahead of the couple and set up a picnic basket with champagne, hand sanitizer, wipes and a blanket.

“We were out for a walk, and people were definitely watching us, and she was getting a little chilly and suggested returning home,” Szikla told KNSD. “She saw the basket and thought the space was reserved for someone else, but then I dropped to one knee and popped the question.”

“He started giving this beautiful speech,” the Spanish-born Blanco-Suarez said. “And I was crying.”

The friends were hiding in the bushes, snapping photos, as the Salk Institute neuroscientist said, “Yes.”

“It was a surprise,” Blanco-Suarez said. “I didn’t know it was going to happen in the middle of a quarantine.”

The 102-year-old ring symbolizes how previous generations have made it through times like these.

“As soon as I found out the significance of it, of what happened in the past, I said, ‘OK, this might actually be the more perfect situation.’ It worked out nicely,” Szikla said.

Szikla imagined what the conversation might sound like when his future wife looks at her heirloom ring and reminisces about their engagement many, many years from now…

“Remember that time with COVID, we were locked in?” she might say.

“Yeah, I remember,” he would respond. “But we got engaged.”

The couple told KNSD that they may have to wait until 2021 to tie the knot.

“We’re just trying to remain positive and as hopeful as we can,” Szikla said.