An exceptional 10.64-carat flawless vivid purplish-pink diamond is expected to sell for as much as $26 million when it hits the auction block at Sotheby’s Magnificent Jewels and Jadeite sale on October 7 in Hong Kong. 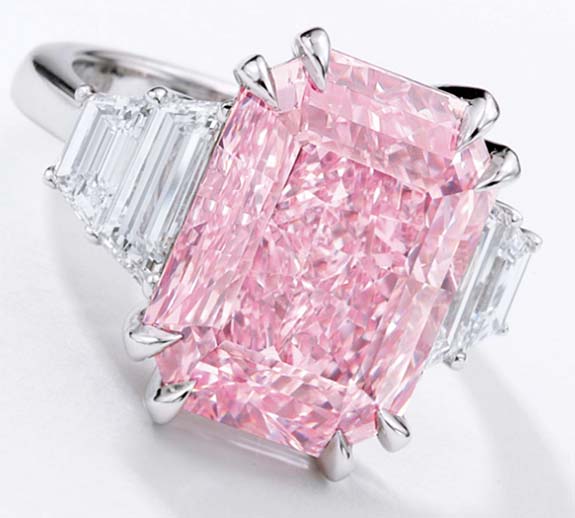 In Sotheby’s auction catalog, the top lot is described as a cut-cornered rectangular mixed-cut diamond, but it also can be described as a radiant cut, which incorporates the shape of an emerald cut with the faceting array of a round brilliant. The stone is set in an 18-karat white and pink gold ring and is flanked by trapeze-cut white diamonds.

Sotheby’s established a pre-sale estimate for the headliner at $20 million to $26 million. If it achieves the high estimate, the diamond’s price per carat would be $2.44 million — a number on par with some of the most famous pink diamonds in the world.

For instance, in November 2018, the 18.96-carat “Pink Legacy” was purchased by Harry Winston for $50.3 million, establishing a record price-per-carat for a fancy vivid pink diamond at $2.7 million per carat. The previous record holder was the 14.93-carat “Pink Promise,” which sold at a 2017 auction for $2.2 million per carat.

In April of 2017, the 59.6-carat Pink Star — a flawless, fancy vivid pink diamond — shattered the world record for the highest price ever paid for any gem at auction. The Pink Star’s hammer price of $71.2 million at Sotheby’s Magnificent Jewels and Jadeite sale in Hong Kong.

It is believed that pink and red diamonds get their rich color from a molecular structure distortion that occurs as the diamond crystal forms in the earth’s crust. By contrast, other colored diamonds get their color from trace elements, such as boron (yielding a blue diamond) or nitrogen (yielding yellow), in their chemical composition. Pink diamonds larger than five carats are rarely encountered. In fact, fewer than 10% of pink diamonds weigh more than one-fifth of a carat.

Other top lots at Sotheby’s Hong Kong auction will include a spectacular ruby ring and a super-size flawless diamond, both of which feature the number “88” in their carat weights. The number 8 is the luckiest number in Chinese culture and is believed to bring good luck and prosperity. With each hundredth of a carat equally 0.002 grams, precision cutting and care was required to finish the polishing of both gems at just the right moment to achieve double eights in the final weight. 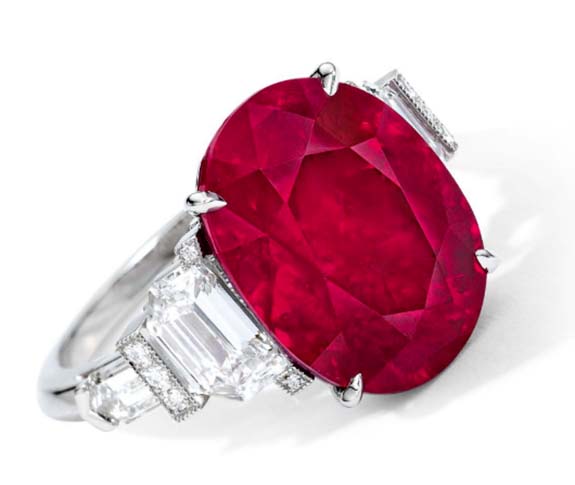 • Superb Ruby and Diamond Ring. This ring by designer Raymond Yard features an oval Burmese ruby weighing 11.88 carats. The ruby is set in platinum and is accented by various shaped diamonds. The pre-sale estimate is $5.6 to $8.1 million. 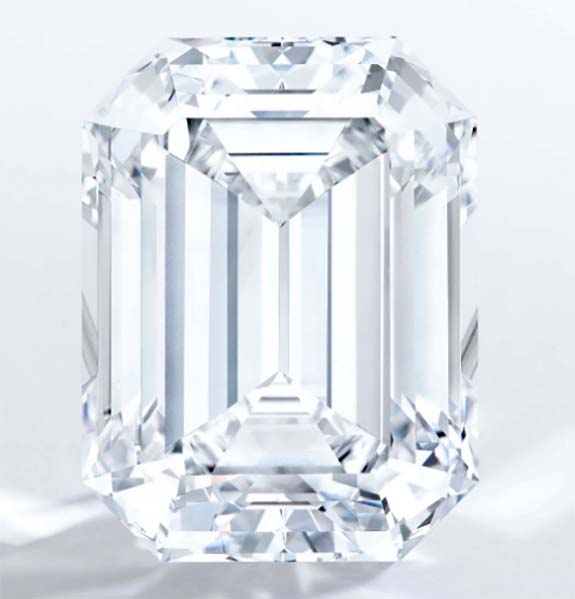 • A Magnificent Unmounted Diamond. Weighing 80.88 carats, this unmounted D-flawless emerald-cut diamond has excellent polish and symmetry. It is reportedly one of only five emerald-cut diamonds larger than 80 carats to have come up for auction. The gem is graded Type IIa, the most chemically pure of all diamonds. It is expected to sell in the range of $9.9 million to $12.7 million.