A Tampa man successfully dug through 10 tons of rotting trash to rescue his wife’s engagement ring that had been accidentally thrown away and carted off to the city landfill on Monday morning. 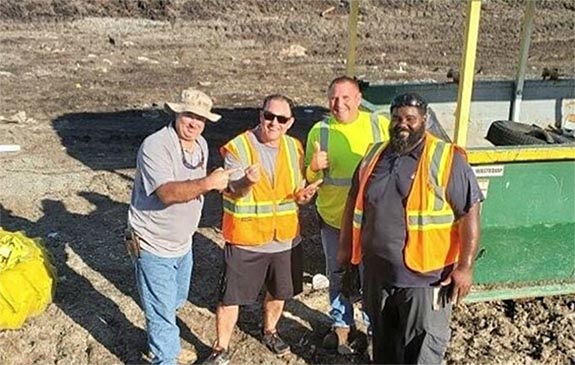 Sara E. Petro took to Facebook to praise the efforts of her husband, Fadi, and a bunch of helpers from the city’s Waste Management – Southeast Landfill team.

“It’s a really rough day, but there is a happy ending,” wrote Sara on Facebook. “This morning I realized my engagement ring was missing. After frantically tearing my house apart and searching to no avail, I realized that I must have accidentally thrown it away with a pile of trash as I was cleaning last night.”

“As you can probably imagine,” she continued, “my level of hysteria was through the roof.”

Her husband, however, was calm as could be. He tracked down a supervisor at the city’s Waste Management facility and explained that he needed to find a single bag that contained the precious jewelry.

The supervisor was able to identify the truck that serviced the Petros’ neighborhood, but explained that the Petro bag already had been mixed in with 10 tons of compacted trash.

Finding a ring buried in that much trash would be virtually impossible, according to the supervisor, but that somber assessment didn’t dissuade Fadi from trying.

“My sweet husband was bound and determined to find it for me,” wrote Sara.

By the time Fadi arrived at the landfill, he had two hours to get the job done. Fortunately, he was assisted by a small team of Waste Management employees.

“I’ll spare the rancid details, but it was a horrendous task,” wrote Sara. “The sweet guys working at the landfill helped Fadi search and THEY FOUND IT!! Literally a needle in a haystack.”

Sara noted that words could not express her gratitude for the efforts of her husband and the Waste Management team.

“I feel very blessed and like the luckiest girl in the world,” she wrote. “These men are my heroes!”