Tourmaline comes in a wide variety of fiery, vibrant hues, such as red, green, yellow, orange, brown, pink and purple. October’s birthstone is even available in bi-color and tri-color versions. But, the most coveted tourmaline of all is the neon blue variety that was originally unearthed in Paraiba, Brazil, in 1987. 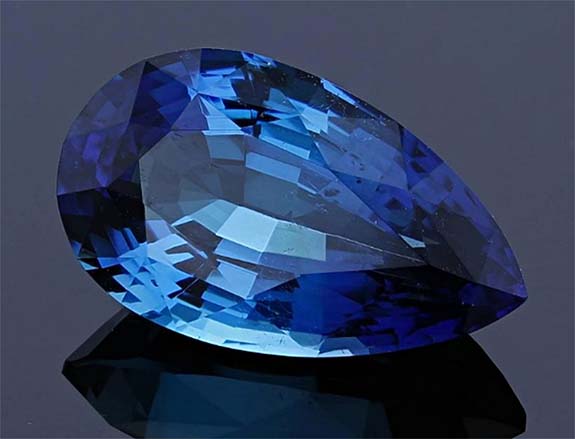 Gemologists learned that Paraiba tourmalines were distinctly different from the rest because they owed their intense blue color to trace impurities of copper. Other tourmalines got their color from the presence of iron, manganese, chromium and vanadium.

Paraiba tourmalines from Brazil are extremely rare, especially in sizes larger than a few carats. That’s why the pear-shaped specimen, above, is so remarkable. It weighs 6.69 carats and is the first Paraiba tourmaline to join the National Gem Collection at the Smithsonian in Washington, D.C.

The popularity of Paraiba tourmaline sparked a mining frenzy in Brazil, and within five years, the supply was largely tapped out, according to the Smithsonian. In 2001, new Paraiba-like tourmalines were discovered in Nigeria. Interestingly, the vivid blue-green gems boasted the same color and chemistry as the Brazilian-sourced goods. Then, only one year later, miners in Mozambique reported a similar find.

Today, gem dealers refer to neon blue or green, copper-infused tourmalines as “Paraiba,” regardless of their origin. Tourmalines range from 7 to 7.5 on the Moh’s scale of hardness, which makes them durable enough to be used in any type of jewelry. According to gemstone.org, a small, vivid-color Paraiba gemstone will have a greater value than a larger one of lesser color, all other factors being equal.

The name “tourmaline” is derived from the Singhalese words “tura mali,” which mean “stone with mixed colors.”