Archaeologists with the University of Cincinnati have unearthed two Bronze Age tombs containing a trove of engraved jewelry that help tell the story of life along the Mediterranean 3,500 years ago. 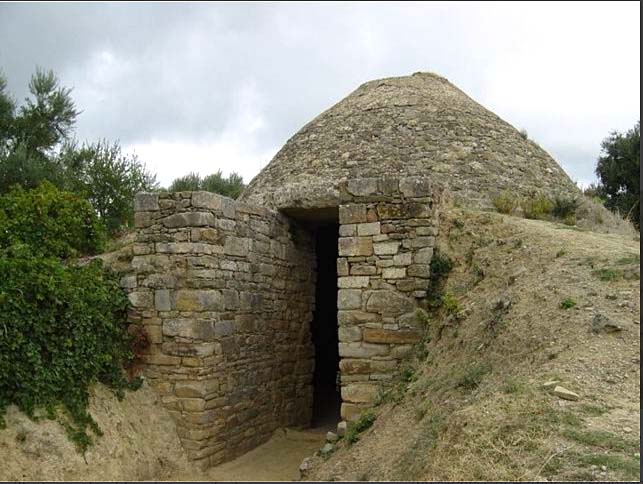 The two beehive-shaped tombs are located in Pylos, Greece, just a stone’s throw from the grave of the “Griffin Warrior,” a powerful Greek figure whose precious jewelry, weapons and grooming supplies were discovered by the same team in 2015.

The researchers were surprised to find that the princely tombs were littered with gold flakes, indicating that gold leaf once adorned the stone walls. 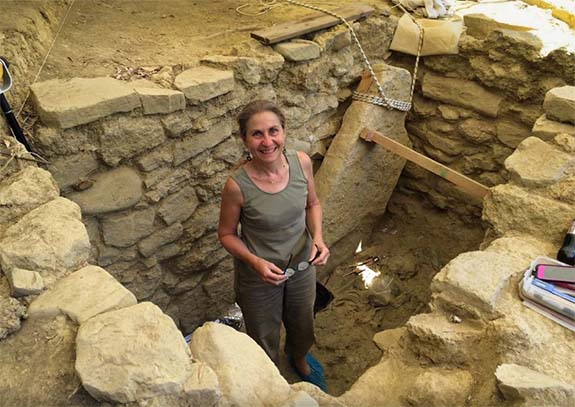 “Like with the Griffin Warrior grave, by the end of the first week we knew we had something that was really important,” said Sharon Stocker, an archaeologist in UC’s classics department, who supervised the excavation.

Added Jack Davis, head of UC’s classics department, “It soon became clear to us that lightning had struck again.” 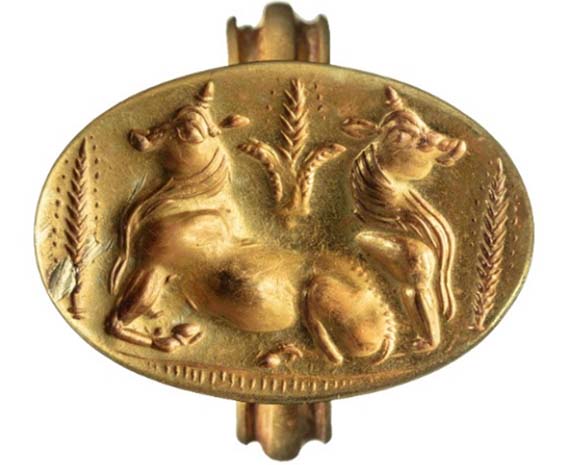 One of the most fascinating jewelry items pulled from the site was a gold ring depicting two bulls flanked by sheaves of grain, specifically barley.

“It’s an interesting scene of animal husbandry — cattle mixed with grain production. It’s the foundation of agriculture,” Davis said. “As far as we know, it’s the only representation of grain in the art of Crete or Minoan civilization.” 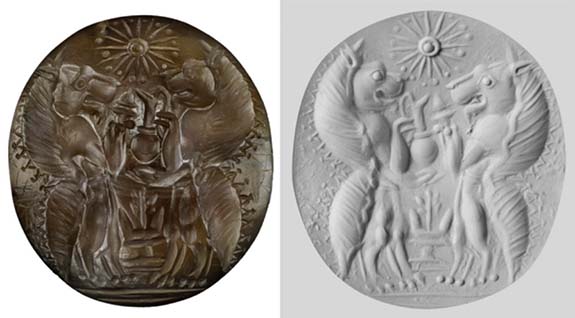 An agate sealstone featured two lion-like mythical creatures called “genii” standing upright on clawed feet. They carry a serving vase and an incense burner, a tribute for the altar before them featuring a sprouting sapling between horns of consecration, Stocker said. Above the genii is an unusual 16-pointed star.

“It’s rare. There aren’t many 16-pointed stars in Mycenaean iconography,” she said. 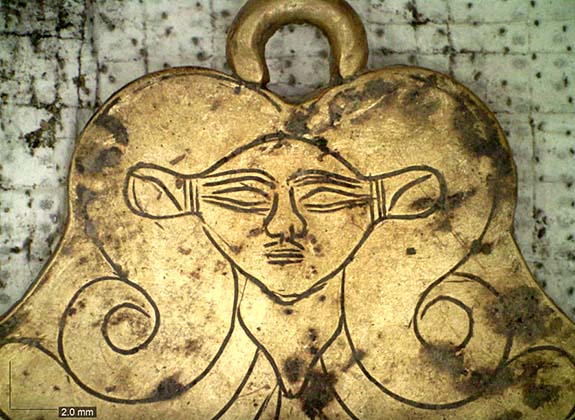 The UC archaeologists also found a gold pendant in the family tombs at Pylos featuring the likeness of Hathor, an Egyptian goddess who was a protector of the dead.

According to Stocker, the evidence gathered from the tombs paints a picture of accumulated wealth and status. The tombs contained amber from the Baltic, amethyst from Egypt, imported carnelian and lots of gold. The tombs sit on a scenic vista overlooking the Mediterranean Sea on the spot where the Palace of Nestor would later rise and fall to ruins. 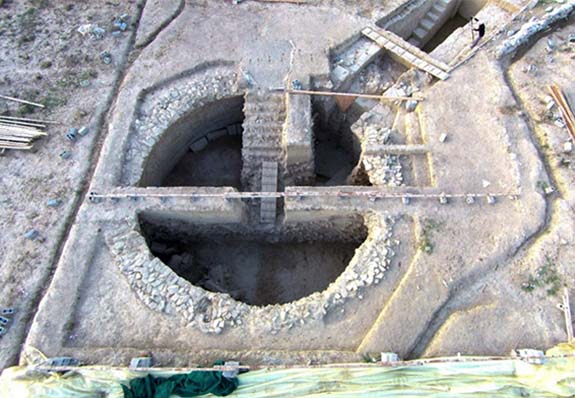 “I think these are probably people who were very sophisticated for their time,” Stocker said. “They have come out of a place in history where there were few luxury items and imported goods. And all of a sudden at the time of the first Tholos tombs, luxury items appear in Greece. You have this explosion of wealth.”

Although Pylos is considered a remote region of Greece because one has to cross mountains to get there, during the Bronze Age it was an important hub for commerce and trade due to its proximity to the sea.

Stocker said that the tombs were protected from the elements and potential looters by an estimated 40,000 stones the size of watermelons. To access the tombs, each stone had to be removed individually.

The UC’s team is planning to continue its work at Pylos for at least the next two years while they and other researchers from around the globe unravel mysteries contained in the artifacts.

“It has been 50 years since any substantial tombs of this sort have been found at any Bronze Age palatial site. That makes this extraordinary,” Davis said.

Credits: Images courtesy of the Department of Classics, University of Cincinnati.